Since my Treeman is on hiatus, I've directed my creative juices to other things. This time I got to show a scratch built war machine for my Infernal Dwarfs and sculpted flower for BMG Poison Ivy.

Both of these are still WIP, but are showing their forms in a way that warranted taking a picture. 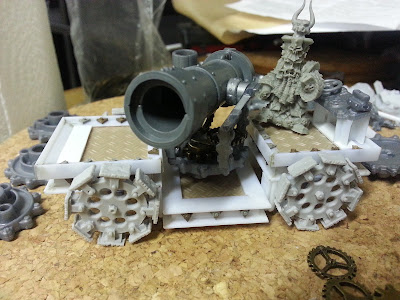 This war machine is Volcano Cannon, a giant flame thrower. I'm envisioning it more of a flame spurter, firing a big blob of napalm rather than a steady stream of petrol.
The weapon itself is huge too, towering over every regular cannon in the game. I've always thought the evil dwarfs doing their weapons powerful, noisy and comically large.

I've taken some inspiration from the Forge World versions when making the carriage, although this is much smaller and barely fits on a 80mm round base (should be 75mm, but I'm cheating a bit). It is made from different profile styrene rods and textured sheets; self made rivets and few other unnameable bits.
The gun is pretty recognizable, it's from GW 40k building terrain set, and the rack is from an old sci-fi chemical plant terrain set, as is the control panel on the right.
Wheels are Kromlech artillery wheels.

Note that I've tried to inject some realism to this thing. On the left side of the cannon there is funnel the loader can shovel the fuel in, and below the weapon there are gears so that it can swivel around. I still need to have some belt going from the gears below the control panel.

Left side of the carriage will be for the loader who'll have a big vat of the napalm stuff.

The gun and the crew platforms are magnetized so that I don't need to do so all the variations of the war machines I'll be using. 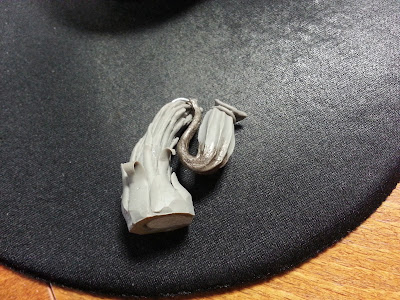 I've decided to take on a single small Batman Miniature Game gang. I don't much care for anything DC or the real scale miniatures the game has, but I bent under the pressure - of everyone around me playing the game - to check it out. Thus this project will be much more experimental than my normal ones.

I love my wood elf stuff and most nature-y stuff in fantasy, so I decided to go with Poison Ivy. The other reason being that I wanted to try to sculpting more non-humans.

The plant above is the Plant Slave #2. It has limited poison spit ability and it detects invisible enemies near it. I'm basing all of my designs on real life carnivorous plants rather than the fantasy ones, and this bulbous thing seemed to fit the bill the most.
I'm adding another one of those bulbs to represent that it only has two shots of poison, and to make it seem more a flourishing plant rather than just a unit in a game.

What I'm thinking of ending up with is:
Ivy herself (bought, not sculpted)
Swamp Thing (also bought)
Borj (a weird special plant)
2x of each plant slave (6 in total)