I've been taking holiday, flu, and general disinterest breaks from building minis, but now my fever has gone up again. A miniature fever that is.

Warhammer 40k is a game that I started 20'ish years ago with a few friends, and we all fell off it quite quickly (my friends fell from miniatures as a whole). Just before new year one of them informed me that he's taken up on Kill Team, a 40k game that has just a handful of troops. Pretty much like Mordheim but with 40k stuff.
There is few variations of the game, the official GW version, and the unofficial Heralds of Ruin. He decided, after looking up reviews, that HoR was the way to go.
So here we go, back to the world of grim darkness of the future where there is only war.


In my unending quest of how to save space with gaming terrain, I've had some ideas for sci-fi terrain but no reason to build any. Now I have.
The original idea was to make hexagonal (the most sci-fi shape there is!) buildings that could nest inside each other. I deviated from this plan by having octagonals, because they are easier to do. 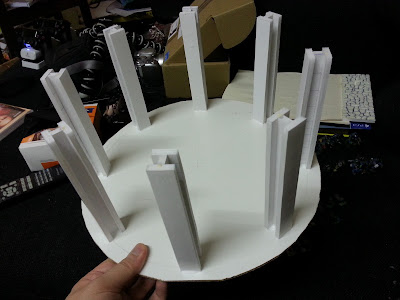 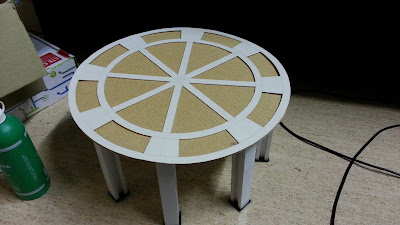 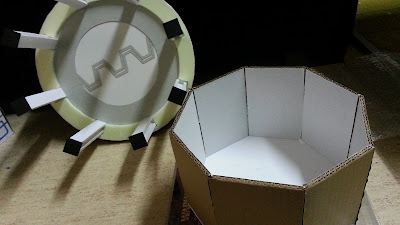 There we have some WIP pictures to show off my friends what I have cooking.
The biggest octagon is a landing pad of sorts, and if you don't like the height, you can flip it over to get a big missile silo thingy. The pad has a diameter of 12", so you can place it in the middle of the board in some missions to also have it act as a deployment zone.
The cardboard box is the next big building (most likely a rusted out silo) that can be inserted between landing pads struts.

All of these are of course heavily WIP, and I intend to keep these relatively simple compared to my Mordheim stuff. No interiors and simple forms (for obvious reasons).
Only planned things for the pad is additional structural cross sections to struts, maybe some rivets, and finish it off with some sand and gravel spots.
Lähettänyt Simo klo 4.19