Eight days in a row! Seven Chaos Dwarfs Warriors ready, and a whole bunch of bases.
These guys are awful to rank up so I took good care that my command group is as close together as they can, so I'll have some leeway to get the others to act nice.

Next up is three Citadel Guards, who have statline of pretty much all 4's, and got 18" rifle that also acts as a halberd in close combat. They will also all have closed helmets, and I'm planning to paint the helmets all black/copper instead of black/red just to further differentiate them from the Warriors.

Oh, and the banner will come later. 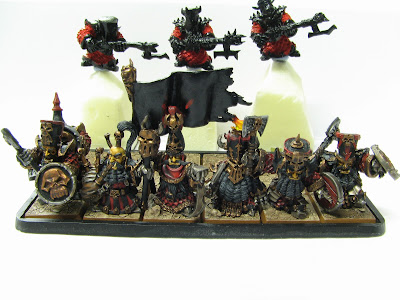 And as a bonus, some unfinished bases for the character mounts. All of the bull sculpts have them standing on only two hooves. So I'll be balancing them with the base clutter.
Lammasu's base on the left, will have its front hands (weirdly enough it has both, hands and hooves) resting on the dried up tree; the Great Bull has its hind hooves up in the air, so one of them will be balancing on top of the tree stump; and the smaller Bull will rest one of its front hooves on top of the rock pile. 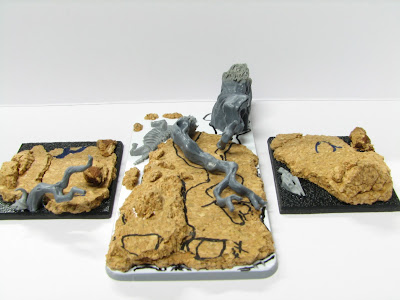