I bought this new molding stuff to try out. It's real easy to use but has limited applications. Only thing you do is boil water, drop a handful in there and let it melt. After the water has cooled so you can fish it out you just slap the stuff on your master and let it harden, and boy does that thing harden! It's about as hard as a plastic bucket, now imagine you have something detailed stuck in there. If there is even a tiny bit of negative in the mold, it's real hard to get out.
It's also reusable! 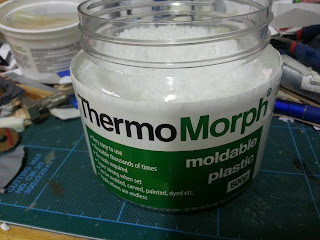 Here is a bit I made using ProCreate. Mold holds details really well! 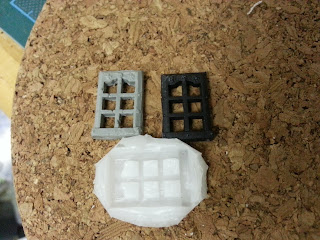 Now the real deal here is that I wanna have something really simple. No resin measuring, no epoxy kneading, no plaster dust and no mess with clay. Enter My Dough! 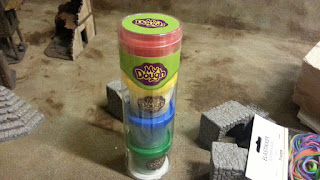 It's one part, doesn't leave a mess and hardens without oven (also smells nice). These are the things I wanted out of the stuff. Pretty cheap too! 6€ for the tube.
It has its disadvantages too. It shrinks quite a bit, loses some of the sharpest details, and is somewhat brittle (I'd say in a ballpark of plaster). The shrinking is the thing though which makes it hard to use. For example that window frame above would never work with My Dough, since the mold don't allow it to shrink lengthwise, it'll rip itself apart.

And here's a copy of a thing that My Dough excels at. A simple stamp type mold.
Both have been made using the same mold. Shrinking is real! 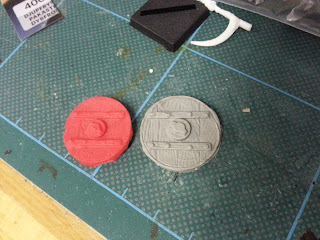 Next up is something a bit challenging, barrels and boxes, and other more three dimensional objects.
Lähettänyt Simo klo 2.18