Game's creeping along out of sight

I've been forced to playtest my game solitaire now, and it has actually been more revealing to me than testing with a group. Shit gets boring alone. Game's all but killing the same stuff without any twists. That's something I need to address.
Granted the previous testing have been only for different mechanics, and not the "game" itself. The picture shows the situation in which I said fuck it, and left it there - half of the objectives done.

Regarding the picture. Not much has changed since anyone has seen it last time, and theres not many of you. But dissecting some details (that you can make out from the shitty phone camera), you'll have the following:
- The mat's cut. It does not actually go any further from the edge as is shown. So it won't overwhelm the players. Don't know if it's enough or too much, but it had to be done for my sanity.
- New numbers on weapon cards, just a new dice mechanic. It's now just a simple exploding dice pool seen in many other games instead of fucking math! Hopefully makes the game faster.
- Creature behaviour. The game's now actually fully cooperative without a need of a GM. If you look closely at the creature cards, there's Retaliate (when they get hit), Opportunity (when a player tries to escape them in melee), Action (made after each turn), and Special (will have reminders for anything special the creature has).
- Some WIP enemy models at the bottom right, made from hot glue and random tentacle bits.


A lot of tiny tweaks has been made to try to make the game just faster, and as such it has changed more to a gore-fest rather than survival what I first imagined. Though the main two sources on inspiration were definitely more on the gore side than survival (Left 4 Dead and Doom the board game).

The following tweaks have been made:
- Player now can attack with more weapons. I'm still spitballing the specifics, but the more players can attack, the more they get done.
- New dice system as mentioned above, hopefully makes the game go faster.
- I've been all over the place on how the looting system works. Last time players only could loot one corpse as their movement stopped at the first loot. Now I think they can loot as many corpses they can run over. Again because the players have places to be.
- No more player health to be tracked (a new system I'm somewhat excited about, more details below).
- Stamina management is somewhat more streamlined. It's now a valuable resource to be used when you need the most bang for the buck rather than the "other health bar" that the enemies gnawed away. It now has a real meaning.
- The basic zombie fodder has been simplified. No more scaling defense values or moving every turn.
- Some other things I've forgotten. 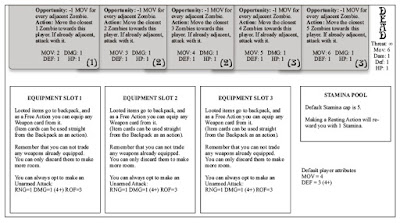 The picture above is the player aid character sheet mockup I slapped together last evening.
EDIT: The pic is actually much newer sheet, the original picture got destroyed.
The interesting part of it is those gray slots at the top. They are the slots where curse (and maybe creature) cards go. It also shows how aggressive the Zombies are towards you (the numbers in picture are just copypasta, and not real values), AND it acts as you health, when you fill all the five bars you're out of action.

This hopefully acts as one of the "twists" mentioned at the start of this post, where players need to have something to do besides killing, in this case they need to try to cleanse themselves of the corruption that's building on their character and weakening them.


Many changes still to be done


So I now got new dice system, health system and more refined stamina system. After that I need to fully revamp the skill cards to reflect all of the changes; make the curses more interesting and above all make the purifying options much more interesting, more "twists" if you will; make the enemy spawn more coherent, something I've been struggling with, and I bet continue to do so; and finally make some interesting missions, again something I've failed to come up with.

So most of the game elements have had a complete overhaul, even before the game around them had fully formed. This game was always meant to be the babbys first game for me as a designer, and continues to be so as far as all the testing and changes going on. Hopefully I can get the game to a point that I'm satisfied with.
Lähettänyt Simo klo 2.09