Hard times are over

Hello again!
I've been so overwhelmed with work that no time has been given to anything but relaxing afterwards. Now that things seem to be somewhat normalized, I have the brain power to continue posting these ramblings.

Many of these projects shown here are sorta lika side stuff that gets made whenever I have any inspiration for them. My previous attempts at doing something "full-time" have been bad, I get easily distracted and bored of any single thing (that's why I have three different board game projects going on at the same time). But here I go again, trying to get something bigger together fairly quickly.

Oh Mordheim, my favorite GW game of all time, oh how broken and random you are at your core.
In Mordheim the main focus isn't actually the figures, but the terrain. The game needs lots of it. And with lots of something there is the aspect of transporting and storing it. 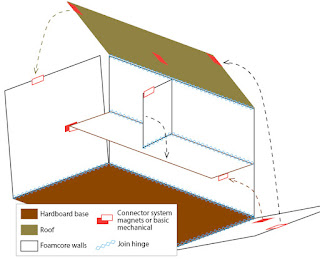 I've already done one such building, but it folded towards itself rather than outwards. That design, while it was really tightly packed and cool, had many flaws that I hope to remedy with this new, somewhat clumsy looking thing.

The main things I want to achieve with this is of course is to minimize the amount of air needed to store and carry around, but I also want them to be easily assembled - I don't want just to have a bunch of loose walls in a box, but one whole thing that you pick up and fold together.
Lähettänyt Simo klo 1.12